These Panther Creek Falls engagement photos were SO FUN. Oh my gosh. It’s crazy because I’ve known Brittany and Nate a LONG time. We met at Oregon State, back in college. I actually got to know them separately before they ever started dating. Brittany and I bonded over our shared love for New Media Communications (our major), wine (because duh) and adventure travel. Brittany helped me plan my very first solo international trip to New Zealand because she lived there for 6 months while working in the wine industry. The year after that, she came to Thailand with me for a whirlwind adventure. We’ve done photoshoots together in the past, (like this one in Oregon and this one in California!) and she’s still one of my closest friends today. I love her to pieces. Then there is Nate. How do I even begin to describe Nate? I met him even before I met Brittany. He was in a band in Corvallis that I photographed very early in my photography career (oh my god those photos are hilariously bad). He was friends with lots of people I knew, he went to weddings I photographed, and he was always just this super nice, t-shirt wearing straightforward guy. I knew three things about him: he loved music, he was into accounting, and he was one of the most blunt people I had ever met. Then Nate met Brittany. I can’t remember exactly how, I just remember her going on a few dates with him in Portland and all of us oohing and ahhing that two people in our friend group were seeing each other.

When they first got together in Portland they dated for awhile, but as relationships in your 20s often go, things didn’t quite work out. So, Brittany moved to San Francisco for her job, and Nate was left behind. That is, until Nate realized that no way in hell was he getting left behind. In grand romantic gesture after grand romantic gesture, Nate proceeded to move to San Francisco, find an awesome accounting job for a large coffee company, buy a whole new wardrobe, essentially get a makeover, and win Brittany back with adorable date ideas and good ol’ fashioned courting. It was like a freaking romantic comedy. They’ve been inseparable ever since. They are opposites in a lot of ways, but it works so well for them. Brittany is emotional and Nate is highly analytical. They are yin and yang to each other, balancing out perfectly. Lucky for me, both of them moved back to Portland. They got even more awesome jobs, and Nate prepared for his grandest gesture yet. He had a ring custom-made, and planned a hike to a waterfall. Brittany adores hiking, loves all thing PNW, and is quite fond of adventures and waterfalls, so all of this was perfect. He set up his camera on a self-timer for a photo and instead shot a video. He got down on one knee and proposed to her at Panther Creek Falls as she cried tears of joy. When she told me on New Years Eve I cried 3 times. Because we are such close friends, she refuses to let me photograph her wedding, so I told her I would take engagement photos for her instead. Naturally, we had to go back to the incredible place where Nate proposed. Yes, we had to climb down a rather terrifying hillside/cliff to get down there, but IT WAS SO WORTH IT for these Panther Creek Falls engagement photos! Brittany and Nate, I love you guys so much. I can’t wait to be a bridesmaid in your wedding, and I’m so excited to see what adventures are in store for the two of you! Congratulations 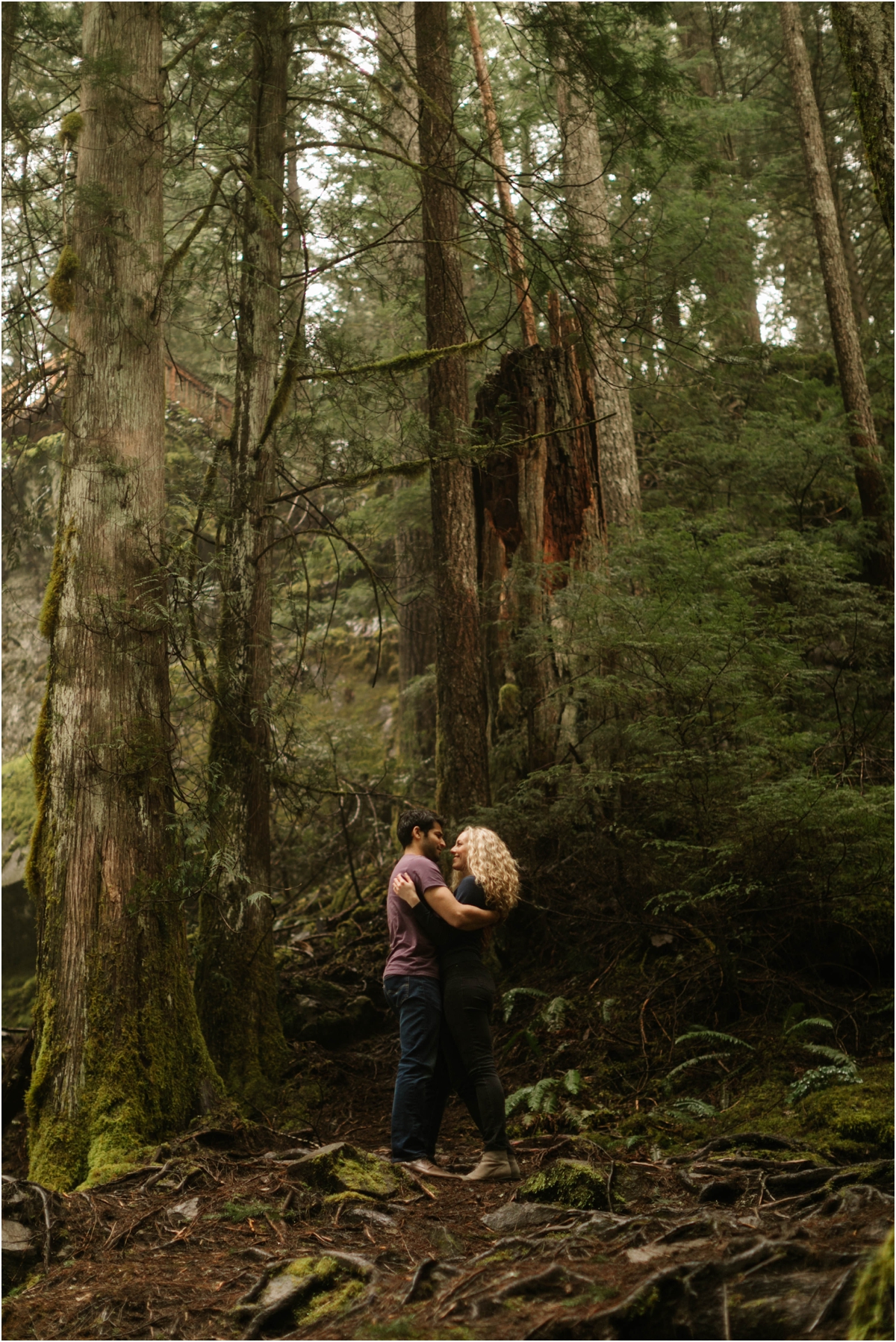 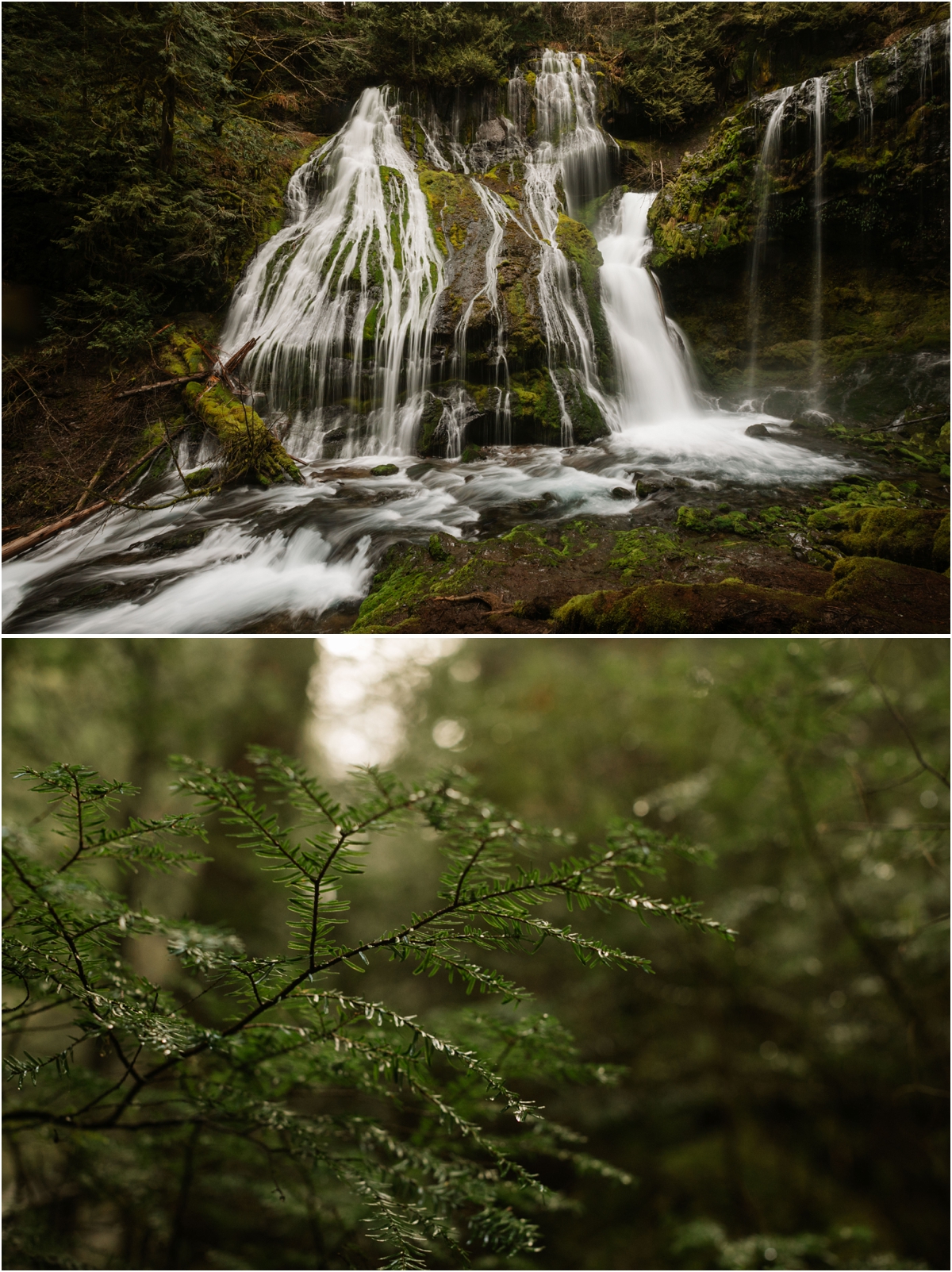 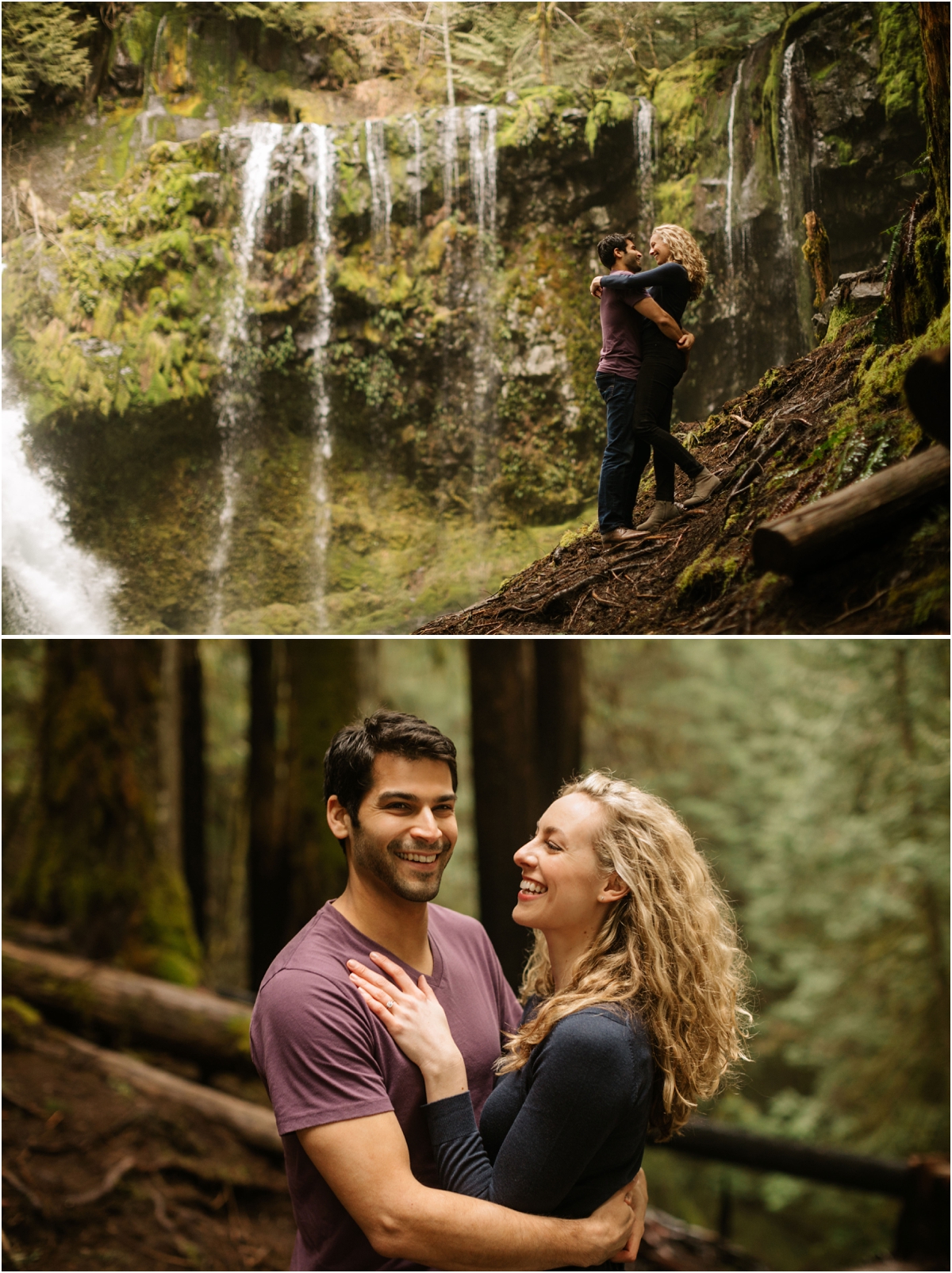 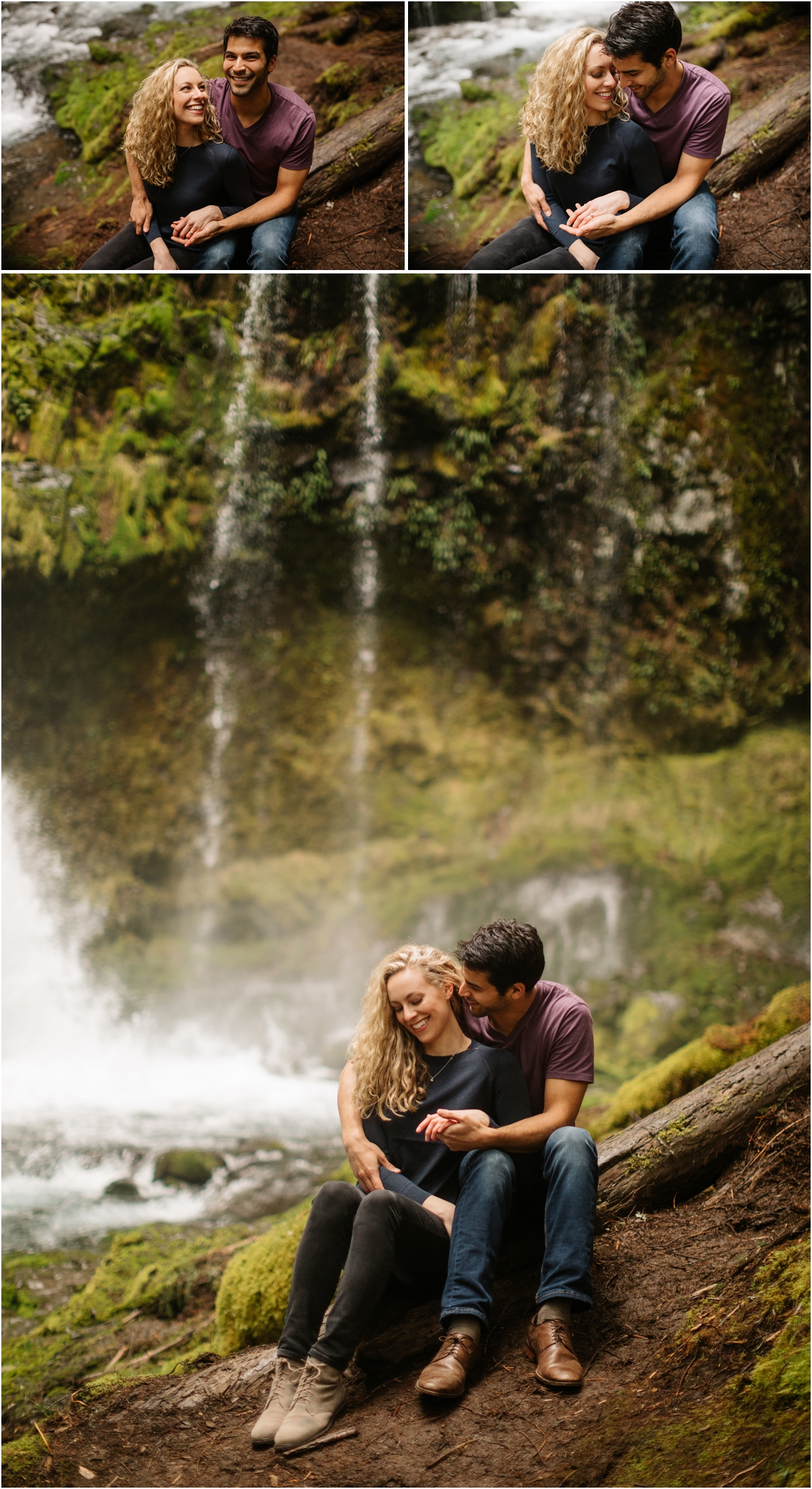 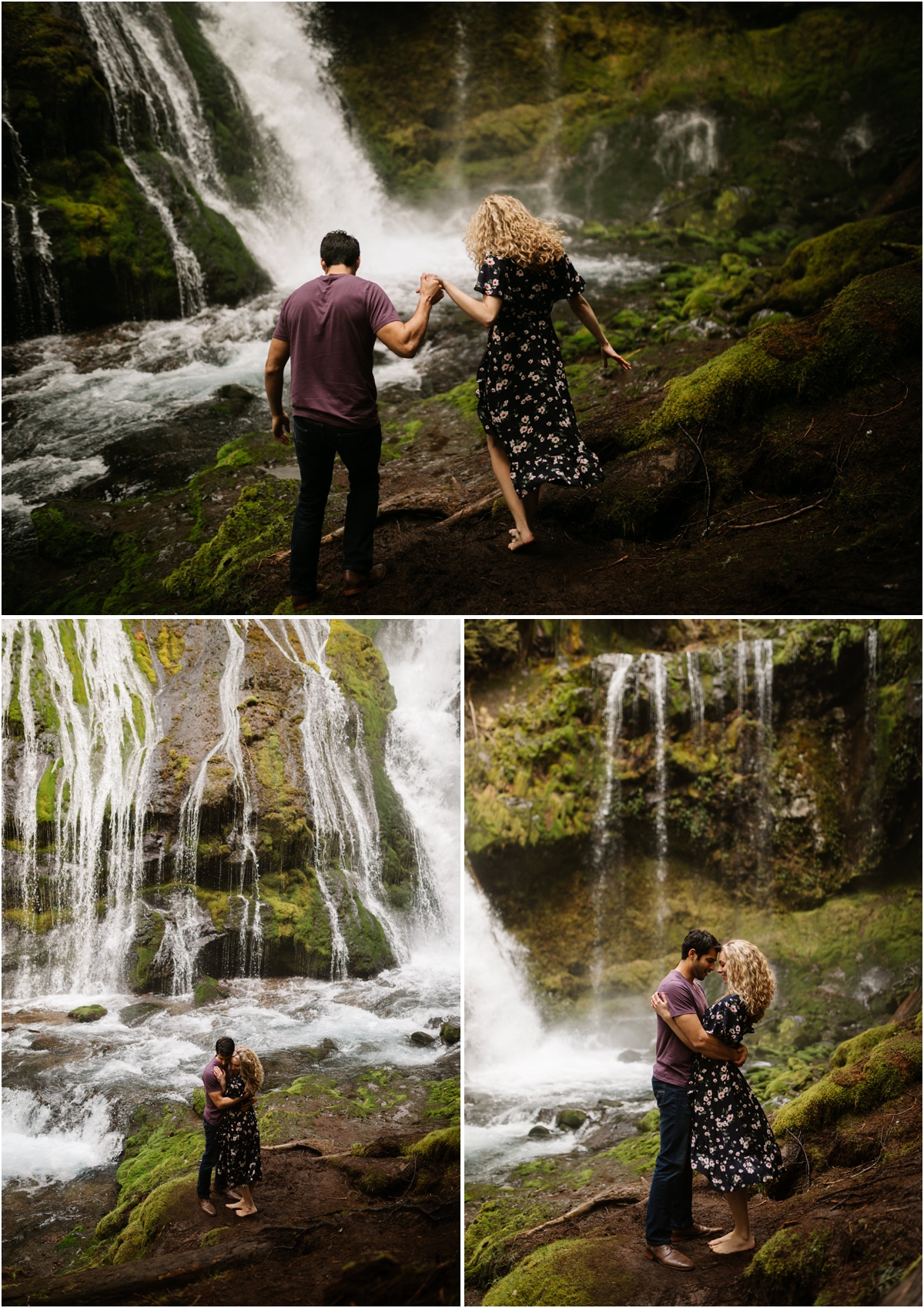 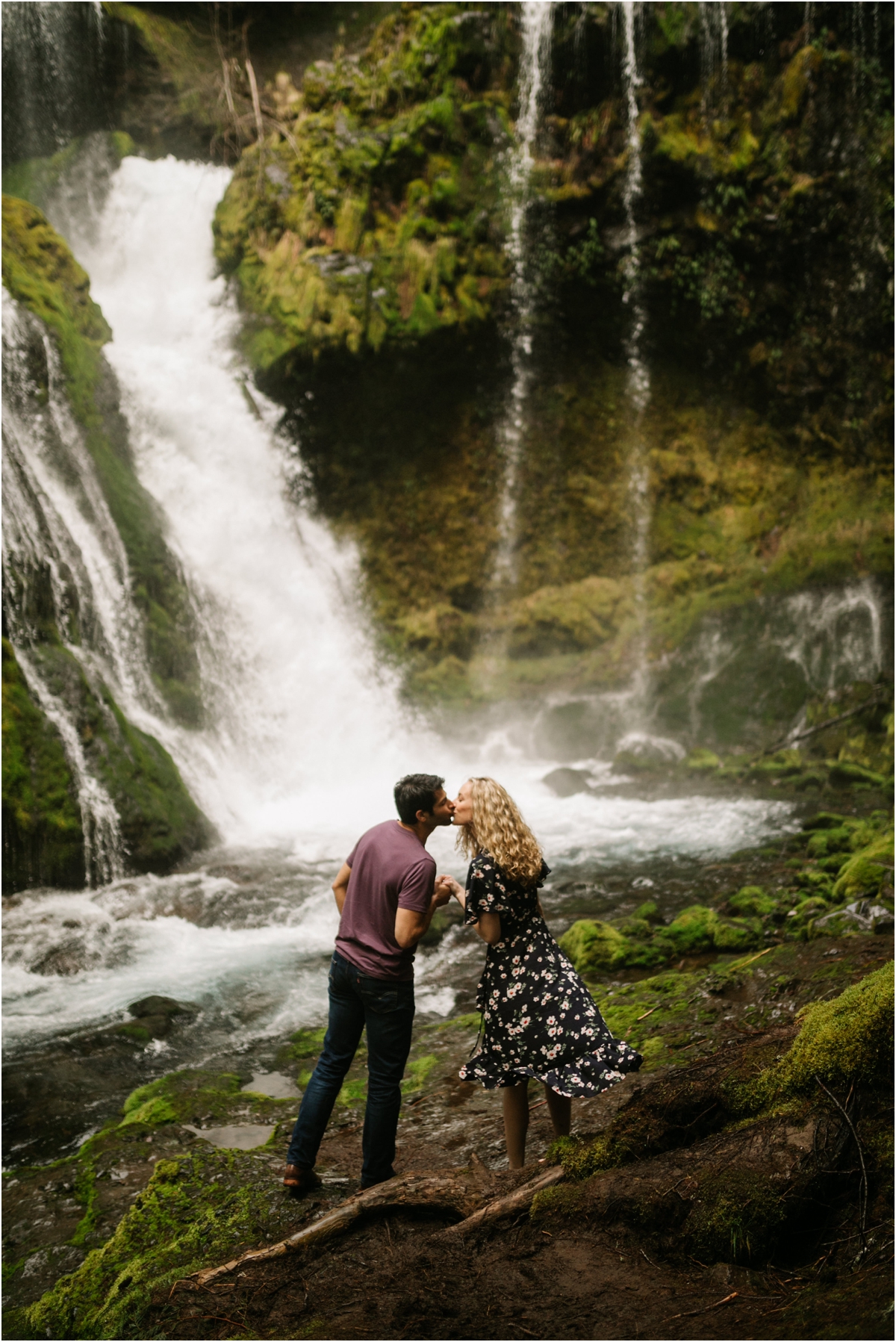 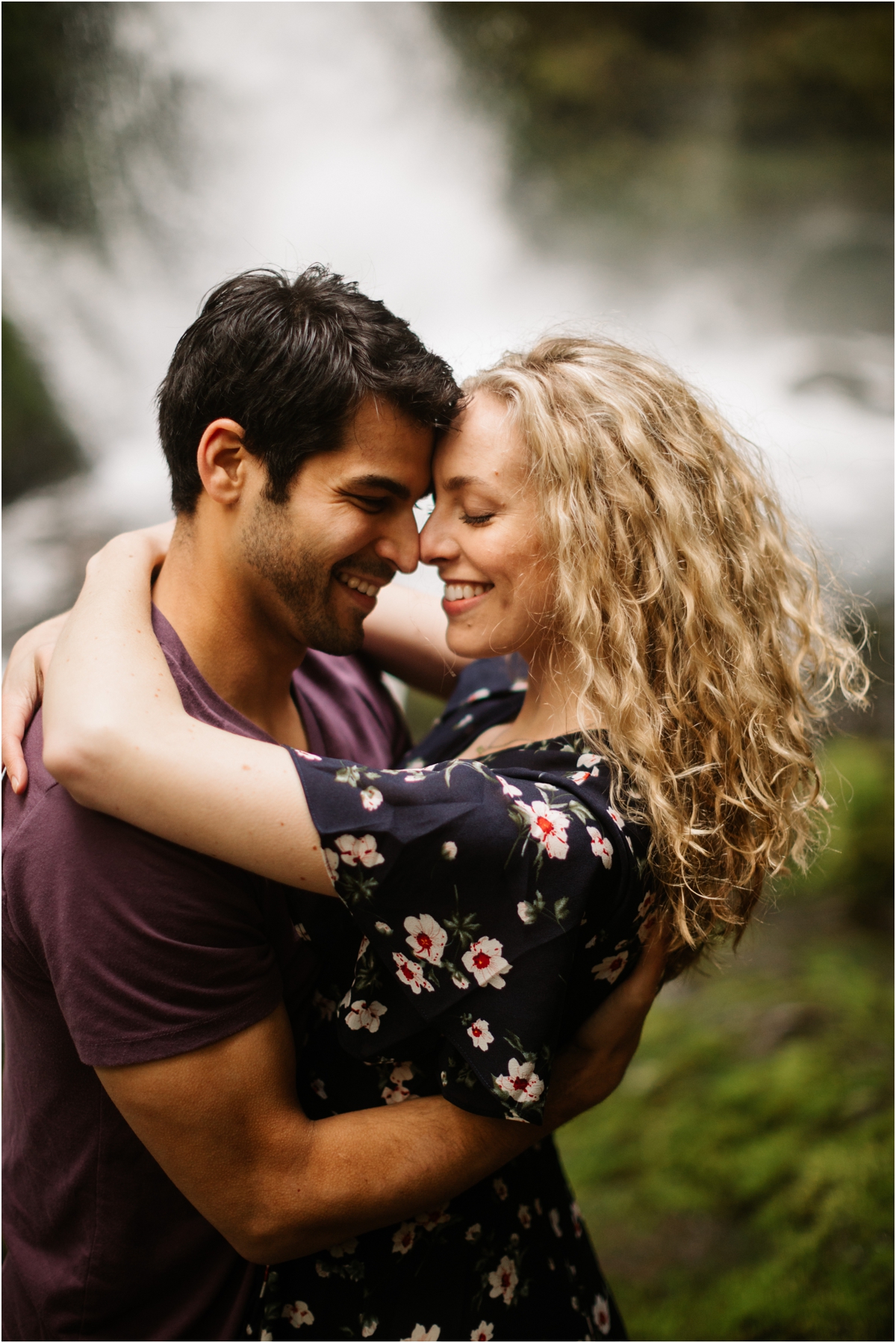 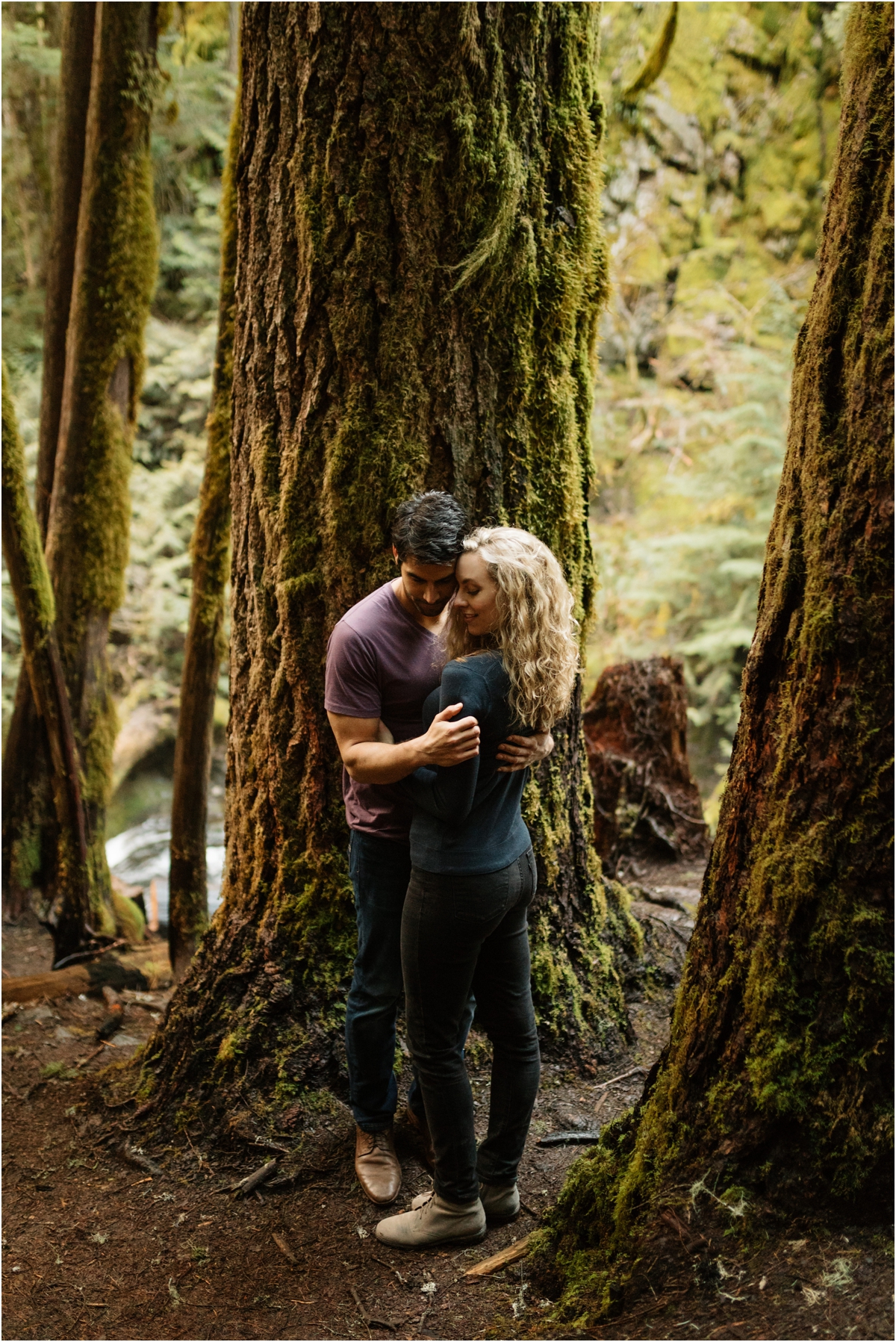 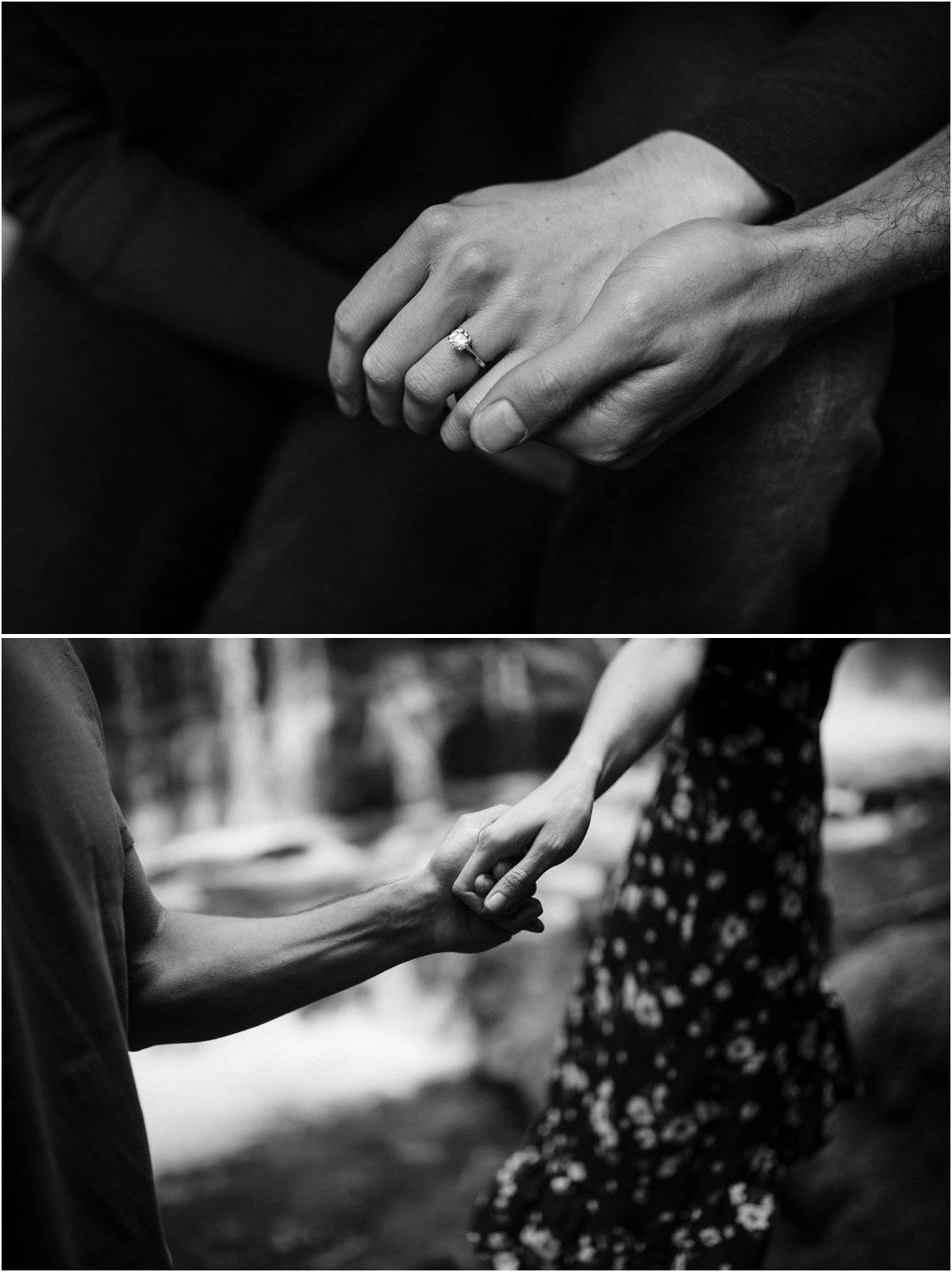 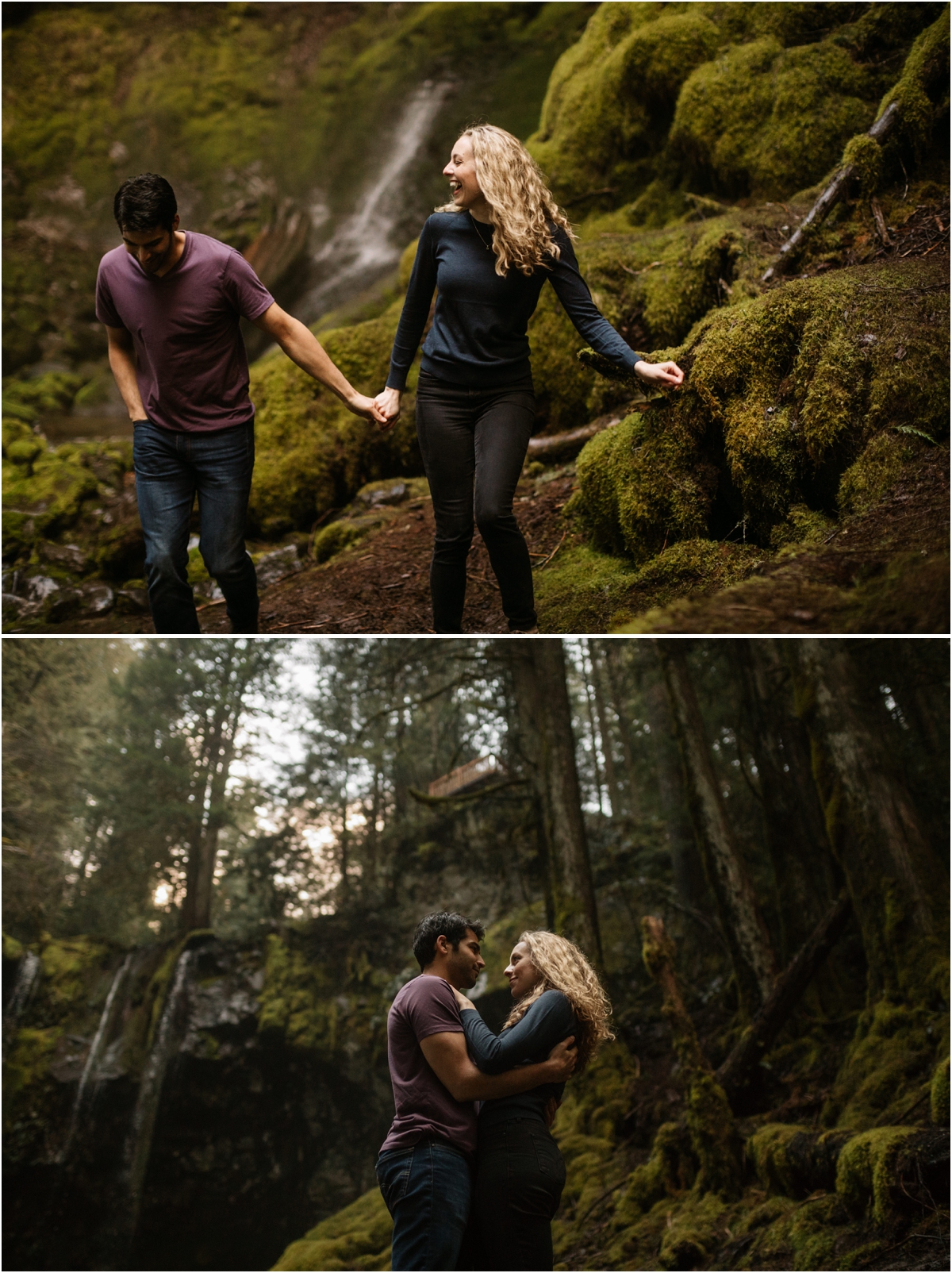